skip to main | skip to sidebar

Something Mark Haddon, author of The Curious Incident of the...you know, that one, said in the paper the other day struck a chord with me. Like my late friend Siobhan Dowd, he'd written a book with a central character who has Asperger's Syndrome – which, to quote Siobhan delightful term, is "like having a brain that works on a different operating system from other people's". Haddon said he wished he hadn't allowed his publishers to put the word "Asperger's" on the cover, because it then became an 'issue book', and he found himself constantly protesting "it's not really about Asperger's, it's about difference. It's about acceptance of others. It's about that sidelong, Martian view of the world." (Would it have made any difference to people's perception of Curious Incident if the word 'Asperger's' hadn't been put on the cover? Personally, I doubt it. I think maybe Haddon should trust his readers a bit more to 'get it.')

Now, the last thing in the world I want to write is "issue" books. Perish the thought! The very term conjures up the image of an angry, frustrated teacher with greasy hair haranguing their class to "PAY ATTENTION NOW,  while I tell you something IMPORTANT, OK?". Argh; heaven save us from Worthy Folk Imparting Knowledge! I just want to tell a cracking good story.

HOWEVER I also think this: you're damned if you do, and you're damned if you don't. Not highlighting 'issues' has problems of its own.
I was recently at a publishing party and I mentioned to a well-known (male) author who shall remain nameless that I tackle some pretty big issues in my books, and he quipped, 'what? Like choosing which dress to wear?' Something tells me this author hasn't actually read any of my books; he's making assumptions based on the undeniable girliness of the covers.


So here, just for fun, I've mocked up some alternative covers for some of my titles – just in case you were wondering if my books really were about anything else besides choosing a frock:

OK! That's that cleared up, then! Any questions, see me at the end of class.
Incidentally, speaking of Siobhan Dowd: as it's Easter and you might be wondering what to do, I may as well remind you that the stage play of her book-that-features-someone-with-Asperger's-but-isn't-'about'-Asperger's, The London Eye Mystery, brilliantly adapted for the stage by Carl Miller, is on in London NOW – but be quick! It closes on April 18th.You can read Culture Witch's piece about it here, and Bookwitch's piece, which I'm linking in spite of the fact that it includes an extremely unflattering picture of me, here. Below is a picture I took at the (belated) launch party, of Siobhan's sister Oona (mother of the nephew who inspired the book!) with actors John Cockerill (Ted) and Samantha Adams (Aunt Gloria): 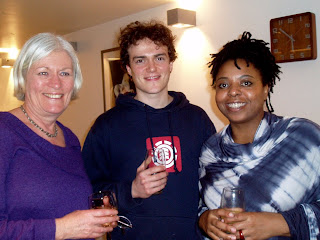 Oh, and another "incidentally": for reasons I can't divulge without giving the plot away, Toonhead is the perfect read for Easter. We're in for a cold, wet one, so curl up in front of the fire with a nice Fair Trade chocolate egg (see what I did there? Issues!) and read this. 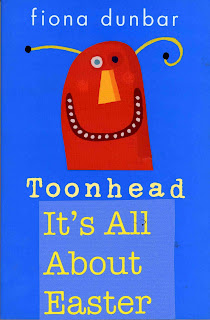 Jinx update! If you're a fan of the program, do join the Jinx Facebook fan page! We're hoping there might be a second series.

I think your publishers should change those covers right now. 'Capitalism will be the ruin of us all' is such a great strapline!

AM torn between growling at unnamed male author's glib comment and applauding your defence. None of your characters spend all their time deciding what dress to wear , unless *PLOT SPOILER ALERT* they've been hypnotised. No, am definitely growling....grrrr.....

And here I thought you looked good... Sorry!

Name of stupid author, please! I feel an urge coming on.

terrific idea for a blog post - very creative, fiona. and folks, it's true - the pinky covers do lead expectations the wrong way. fiona's books are smart and have a lot to say.

@Kathy: the irony of that person's remark is that I'm satirizing the fashion industry in Silk Sisters!

@bookwitch: it's OK, I didn't think it was deliberate! Hey, we all have our off days. Not giving away that name.

@Candy: Thank you! Amanda Craig says the same thing – among others. I'm not trying to diss my publishers; they have hired some top-notch artists and designers, and they rightly recognise that my work is 'commercial'. And as I have said before, I probably was asking for trouble, putting the WORD 'pink' in one of my titles! But misconceptions abound.

Issues in novels don't have to be obvious ... you are so right- it is about the story. I hope my having an educational background doesn't mean that I must forever more write an 'issue' novel. That said, I do write about things that I am passionate about and that does sometimes result in my dealing with issues. Sounds like anonymous male writer was being a bit sexist to me!

Well said! I don't know who the author was, but it was a silly and superficial remark. Nearly finished Toonhead, btw, and loveing it.